Technology is advancing continuously. It is adapting to fit in with our lifestyle today! For seniors living in remote rural areas, or on large private estates, there is news. Officials in the County of Renfrew in Canada have been planning on how to go about saving lives with medical aerial drones.

Canadian Paramedic Chief Michael Nolan said that up until now, the medical services have had some support from medical drones. The drones were used in cases where medical personnel had an unobstructed view of the event.

Now, tests are being carried out for a group of drones that will work with a wireless network (like those used in a tablet or phone). Via video and audio communication, medical personnel will be able to instruct victims or their family in using the medical equipment that has been sent their way. This will be used over longer distances where medical assistance is needed, out of the view of medical crews.

Cardiac arrests in seniors are a medical event, where every minute counts in saving the victim. A quick response prevents permanent physiological damage to the victim. This could save years of rehabilitation and therapy for the victim, and save healthcare expenses to the government in the long term.

In the case of someone living or located in a far or hard-to-each place the drones could be fitted out with defibrillators (AEDs). So far, the innovative approach to sending defibrillators, produced amazing results in terms of timing. The drones reached their destination an average of 7 minutes earlier than a regular ambulance!

According to GNC, other locations, including California and Texas, are using drones for, or participating in development of, disaster relief programs.

It is quite incredible that drones, which has become commonplace for adults and children for work and entertainment, can be so evolved and developed.

Saving lives with medical aerial drones is becoming a possibility. Price, cyberspace security issues and successful application at the testing stage, will probably decide how quickly this concept will become the standard. 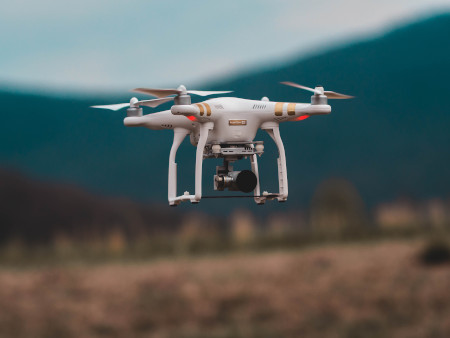 This is an image of a DJI Phantom 3 Professional quadcopter drone. Saving lives with medical aerial drones, can be carried out with similar professional models.

Photo by Jared Brashier on Unsplash