November is COPD Awareness Month. People are focussing on COPD, how to avoid it and how to live with it. COPD with its chronic, challenging symptoms, can have worse effects on seniors. Senior COPD rehab helps seniors fight the COPD symptoms.

These usually include that the patient:

Senior rehab for COPD that are well-known are shown in this article. We will also touch on some other therapies involving light – phototherapy and laser therapy. Additionally, read about an interesting study involving singing. These are direct and indirect options to fight COPD.

The plus about these different therapies, is that senior COPD rehab can involve these therapies. They are not excessively demanding physically for any one COPD sufferer than another, excluding age-factors.

Seniors can be hit worse by the chronic disease. Due to aging, seniors have changing cognitive and physical factors. COPD is found mainly in older adults, although sometimes it is found in middle aged adults. Seniors also often have other health issues at the same time.

COPD commonly affects people who smoke. If you smoke, find ways to stop. This article will show some types of rehab and healing topics for COPD. But, no one wants to be part of the 80% of COPD- fatalities who were smokers.

COPD rehab in general is quite well developed.

Laser or Phototherapy for COPD Rehab – A Therapy Under Development

Laser Therapy and Phototherapy are not the same thing. These therapies are relatively new. There seem to be many studies carried out on how these therapies can help with COPD Rehab.

What they share in common, though, is the aim to reduce muscular fatigue. One of the problems experienced by people with COPD is getting tired easily, or “early muscle fatigue”. Laser therapy or LED therapy has been successfully used on athletes to increase endurance.

A study looked into whether LED therapy could help people with COPD to reduce muscle fatigue. The results have not yet been publicly released.  There are several other similar studies. The results seem to be promising.

Read this easy to digest article about a singing study. A British study found that singing halted the progression of COPD progression. After 5 months, the 60 participants had learnt to breathe better using special techniques. The two factors together, brought most patients an improvement.

Senior COPD rehab can be a challenging practice, but there are some therapies that shine light on the experience. COPD Awareness Month falls in November, the month were days are short and nights are long. Let’s try to shine some healing light on seniors in senior COPD rehab. 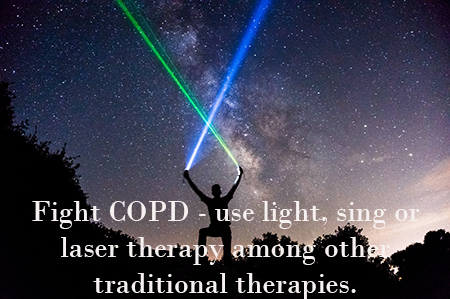 Photo by Tobias Cornille on Unsplash