Regular citizens, assisted living facilities, nursing homes, and medical people at all levels, wish there would be a simple way to perform tests for early detection of Alzheimer’s disease.

If your loved one has been diagnosed with Alzheimer’s, it means there will be challenges in store for him.

What does it mean for you?

Research has been underway for years, to develop a simple way to diagnose Alzheimer’s.

Alzheimer’s is a neurodegenerative disease that is caused by degeneration of cells and brain tissue over the years. It is the most likely cause of dementia among seniors, according to the National Institute on Aging. Alzheimer’s is most common in seniors over the age of 65 years, but can begin as early as the age of 40 years. 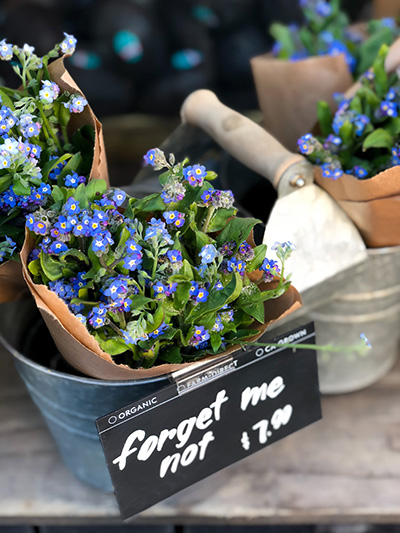 In some parts of the world, the delicate Forget-Me-Not flowers are associated with dementia. The image of the flowers are used as a badge, a symbol of support for those who experience memory loss.

Research, since the disease was classified in 1906, indicates that the cause of Alzheimer’s is a combination of:

The effects of Alzheimer’s include:

People who are concerned that they or their loved one could have Alzheimer’s, often begin their research by consulting the search engines. Fact sheets and lists of early signs of Alzheimer’s such as the one,

provided by http://www.alzheimers.net/ can be helpful. Too embarrassed to ask friends, and fearing the worst, a person might make a doctor’s appointment.

So, how is Alzheimer’s diagnosed?

The family doctor will start by analyzing the person’s medical history, and might recommend a visit to the neurologist or a geriatrician.

Doctors can diagnose dementia, but need all the further testing to identify what the cause is. Extensive testing is done, to rule out other, treatable senior health issues.

Family members are asked to evidence the memory loss.

The medical team examines whether the symptoms may be caused by medicines that the person is taking, or by other illnesses such as Parkinson’s disease or depression.

All this makes the diagnosis of Alzheimer’s a lengthy and expensive process.

A Way to Diagnose Alzheimer’s Early

In 2018 research was already being released as to the development of a new blood test to diagnose Alzheimer’s. A study was carried out and published in the Alzheimer’s and Dementia journal. The study author, Dominic Walsh, wanted to present a new idea. A simple blood test carried out in a family doctor’s practice, not a hospital, could identify the markers for Alzheimer’s early on. The test could be repeated over time, if needed. The study hoped that the blood test would be able to replace cerebrospinal fluid testing, as well as the costly brain imaging tests, that were one of the main tools of diagnosis until now.

Continuing the Search for an Inexpensive, Non-Invasive Test

On August 1, 2019, a new study was published in the Neurology journal. The study found that researchers could test for a neural substance called ‘amyloid beta’ protein, even 20 years prior to people developing the symptoms of Alzheimer’s. A blood test could show the levels of that protein in the blood and how much has accumulated in the brain.

Combining these factors, they said, gave a 94% level of accuracy in identifying people with Alzheimer-related brain changes.

The blood test still needs to be tested on many more people before it will be available in a doctor’s office.

Currently, the research will be used to screen future candidates, for further studies on early detection of Alzheimer’s. The blood test will be used to identify people who are suitable to join clinical studies and who would be likely to benefit from intervention, under test conditions.

Photo by Irina on Unsplash